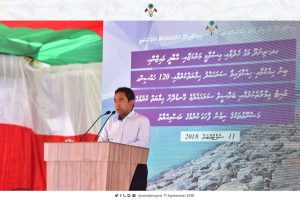 Highlighting the work accomplished by the Maldives in the international arena, as an advocate for Small Island States, President Abdulla Yameen Abdul Gayoom has underscored the support in the international arena for the Maldives. The President made this remark while addressing the gathering at the ceremony held to mark the completion of development projects in Thinadhoo, South Huvadhu Atoll.

While addressing the gathering, the President emphasized that the Maldives’ membership of the United Nations Human Rights Council for two consecutive terms was proof that our efforts towards ensuring human rights is recognized by all. He further said that other small island states look up to the Maldives for better representation in the international arena.

In his speech, President Yameen highlighted the numerous development projects carried out across country during his presidential term. Further, the President spoke of future plans to develope 6000 beds in the coming years, and make the South Huvadhu Atoll a tourism hub.

PRESIDENT YAMEEN PARTICIPATES IN THE CEREMONY TO MARK THE COMPLETION OF SEVEN...MY DREAM IS TO MAKE THE MALDIVES AMONG THE MOST ADVANCED IN THE WORLD –...
Scroll to top