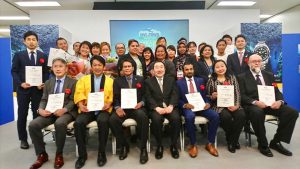 The Maldives has been selected as the #1 Overseas Dream Destination and #2 Overseas Diving Destination among Japanese, at the Marine Diving Fair 2018 in Tokyo, Japan. The awards, presented by the Marine Arts Centre of Japan, were received by Mr. Adam Hamid, Charge d’affaires a.i. of the Embassy of Maldives in Japan.

The Marine Diving Fair celebrates its 26th anniversary in 2018. The Maldives has been a regular feature in MDF, and has regularly been winning awards over the years. This is the tenth consecutive occasion that the Maldives has won the Dream Destination category of the Dive and Travel Awards. Maldivian liveaboard vessel, Island Safari Royal won the Second Prize in the Best Overseas Liveaboard Vessel category.

The three-day MDF 2018 is being held at the Sunshine City in Toshima-ku, Tokyo. It is the largest fair of its kind in Japan.