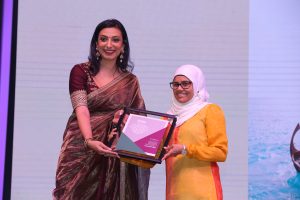 Like every year, the Readers Travel Awards, was chosen through a readers’ voting process spanning two months sans any nominations, recognised the best in the travel industry across hotels, destinations, airlines, spas, websites, apps, cruise lines and more.

The evening began with the Lifetime Achievement Award being conferred upon Padma Shri Laila Tyabji, chairperson and founding member of Dastkar, an NGO working with crafts & craftspeople across India. Tyabji was lauded for her work with artisans over the last 39 years to preserve and popularize Indian crafts globally.

Mallika Ahluwalia, CEO of the Partition Museum in Amritsar, was felicitated by FabIndia’s William Bissell, for her contribution to preserving India’s history. The Condé Nast Traveller and Forest Essentials Excellence Award went to designer Anavila Misra for championing the cause of the quintessential Indian sari and sustainable fabrics through her work. Eminent danseuse and Padma Shri Shovana Narayan presented the award to Anavila.

The Readers’ Travel Awards are chosen through a readers’ voting process spanning two months, without any nominations for the award categories. Considered indicative of what discerning travellers really want and enjoy, RTA recognized the best in the travel and hospitality industry across hotels, destinations, airlines, spas, websites, apps, cruise lines, and more.

This year’s RTA showcased some interesting results: Meghalaya and Gujarat are high up on the evolved Indian traveller’s wish list, while Goa remains the favourite for leisure. Internationally, they are most keen to visit Sri Lanka and the Maldives. On airlines, it seems even affluent travellers put a premium on punctuality—low-cost airline Indigo emerged the winner again. Etihad Airways bagged the title of Favourite International Airline for the second time in a row.

Boutique hotels like The Khyber Himalayan Resort & Spa, Gulmarg and SUJAN Rajmahal in Jaipur were also honored, along with iconic properties such as the Taj Mahal Palace, Mumbai and The Oberoi, Gurgaon. Brand new hotels like the Andaz Delhi, W Goa and Soneva Jani in the Maldives were recognised by the voters. In terms of food, Delhi emerged as the clear winner, with Bukhara and The China Kitchen at the top of the list.

The annual Condé Nast Traveller Readers’ Travel Awards has set the benchmarks in the hospitality and travel industry year on year, since its inception in 1989 in the United States of America.

Forest Essentials & Volkswagen were the associate partners for the event. The Readers’ Travel Award 2017 winners will be featured in the December 2017 – January 2018 issue of Condé Nast Traveller India.

President Declares Passport Card to be recognized as a valid identity docum... The President decides to sign Free Trade Agreement with China
Scroll to top