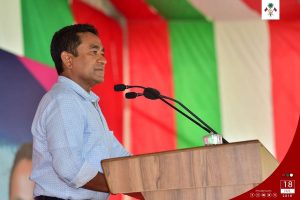 President Abdulla Yameen Abdul Gayoom has stated that GDP per capita has increased up to $10,000 within the last four years because of our strong economic policies. He made this remark while speaking at the function held to inaugurate the services of sewerage system in Kelaa Island of North Thiladhummathi Atoll, as part of his current visit to some islands in the North and South Thiladhummathi Atolls.
Addressing the public, President Yameen reiterated to avoid putting forth one’s own agenda above the nation’s interest. In this regard, the President urged the public not to let any foreign parties to attack the sovereignty of the Maldives. He also stated that any policy or ruling that is in conflict with Islam would never be allowed in the Maldives.
Furthermore, President Yameen conveyed his confidence in the people to be determined and capable in bringing development to the country. He reiterated that this administration was determined to fulfill the needs and aspirations of the Maldivian people.
Concluding the speech, the President spoke on the importance of bringing in more investments and carrying out development projects for the progress of the country.
President Yameen began his three-day visit to some islands in the North and South Thiladhummathi Atolls yesterday. On day-one of his tour, the President inaugurated the services of sewerage system in Nolhivaram Island. He also took part in the ceremony to mark the completion of beach protection project in Hoarafushi Island, and inaugurated the services of sewerage system in Ihavandhoo Island.

President Yameen is scheduled to inaugurate the marina style jetty in Baarah Island today, and initiate the services of sewerage system of Hanimaadhoo Island tomorrow.

LOYALTY IS THE ROOT TO PATRIOTISM – PRESIDENT YAMEENTHERE ARE STILL THOSE WHO PUT THE CITIZENS BEFORE THEMSELVES – PRESIDENT ...
Scroll to top