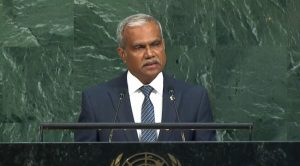 The Minister of Foreign Affairs of the Republic of Maldives, His Excellency Dr. Mohamed Asim issues a message on the occasion of the fifty-second anniversary of Maldives membership at the United Nations.

In his message, the Minister highlight the achievements of the Maldives at the United Nations. Minister’s message reads as follows:

“Today the Maldives celebrates the fifty-second anniversary of its membership of the United Nations.

The Maldives applied to became a member of the United Nations, just a month after its independence on 26 July 1965. It was the first ‘micro-state’ to join the United Nations, which at the time sparked a debate about the ability of very small States to take on the responsibilities set out in the UN charter. Today, the Maldives can proudly say that in the last five decades, the Maldives has made an enormous impact on the world.

The Maldives was fundamental in bringing to the attention of the international community the devastating consequences of climate change. We raised the issue of the security of small states, and gave a voice to the unique vulnerabilities faced by small island states, including through the formation of the Alliance of Small Island States (AOSIS) in 1990 – a group it has chaired since 2015.

The Maldives has served two consecutive terms on the United Nations Human Rights Council. We have been a leading voice on human rights and fundamental freedoms and drawing attention on issues, such as the effects of climate change on the full enjoyment of human rights. At the Council, the Maldives has also focused on enabling the participation of the small island developing states, which lad to the creation of the SIDS trust fund. The Maldives has also served a term on the executive board of UN-Women, promoting gender equality.

The Maldives firmly believes in the power of multilateralism, placing its faith in the United Nations, and its processes. The Maldives has taken principled positions on peace and security, resolving conflicts through peaceful means, disarmament and non-proliferation, and countering terrorism and violent extremism. We believe that every country, regardless of size and might, must have the opportunity to serve. This is why for the first time in fifty-two years of membership, the Maldives has presented its candidature to the United Nations Security Council for the term 2019- 2020. We are confident that the Maldives will bring diversity and determination to the Security Council. We are confident that this next step, in our journey as a member of the United Nations, will bring new challenges, but also new opportunities for the Maldives to provide shared solutions for a shared destiny”.

Tweet
September 21, 2017/by Maldives Embassy
https://www.maldiveshighcom.in/wp-content/uploads/2021/02/Logo-High-Commission-of-the-Republic-of-Maldives.png 0 0 Maldives Embassy https://www.maldiveshighcom.in/wp-content/uploads/2021/02/Logo-High-Commission-of-the-Republic-of-Maldives.png Maldives Embassy2017-09-21 14:39:112017-11-03 14:39:39Message by Minister Asim on the occasion of the fifty-second anniversary of Maldives membership at the United Nations