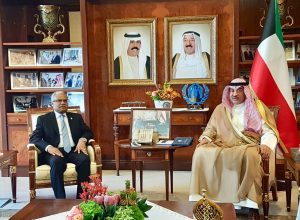 During the meeting, Minister Asim conveyed greetings from His Excellency President Abdulla Yameen Abdul Gayoom to His Highness Sheikh Sabah Al-Ahmad Al-Jaber Al-Sabah, Emir of the State of Kuwait and reflected on the close brotherly relations between the Maldives and Kuwait.

Minister Asim expressed gratitude to the leadership and Government of Kuwait for their valuable contribution towards the socio-economic development of the Maldives and reiterated the importance of further strengthening the historical ties between the two countries. Minister Al-Sabah assured that Kuwait would extend its support in all areas of cooperation and will always remain, as a close development partner.

The meeting was attended by H.E. Mr. Ahmed Khaleel, Secretary Bilateral, H.E. Mr. Abdullah Hameed, Non-Resident Ambassador of the Republic of Maldives to the State of Kuwait and Mr. Abdul Waris Saeed, Director, at the Ministry of Foreign Affairs.

We may be small and vulnerable, but our aspirations for development are by no...Maldives and Zambia establish diplomatic relations
Scroll to top