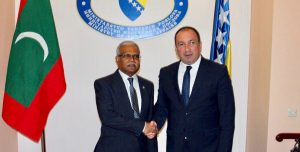 At the meeting, both ministers discussed a wide range of issues including strengthening people to people contact, enhancing tourism cooperation with Bosnia and Herzegovina, formalizing the cooperation between the two Foreign Ministries through an MoU and appointing honorary consuls, with a view to further enhancing the ties of friendship and understanding that exist between the two countries. The Ministers also discussed important multilateral issues of mutual concern and agreed to cooperate more closely in the international fora, especially at the United Nations.

The Maldives and Bosnia and Herzegovina has a long history of close relations and 27 January 2018 marked the 21st Anniversary of establishment of diplomatic relations between the two countries.

Embassy of Maldives participates in the Global discussion on Gender Equality...Police work is an esteemed and honourable duty – President Yameen
Scroll to top