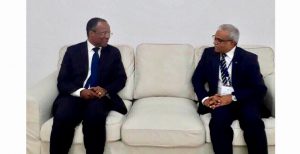 During this Call, Prime Minister Correia e Silva and Minister Asim discussed the impacts of climate change affecting the two countries as Small Island Developing States, and reiterated their commitment in forging together a common approach towards climate change advocacy. They also exchanged views on strengthening bilateral relations between the Maldives and Cabo Verde.

Minister Asim is in Cabo Verde on an official visit. He was accompanied by Ms. Samahath Zuhuree, Assistant Director at the Ministry of Foreign Affairs. 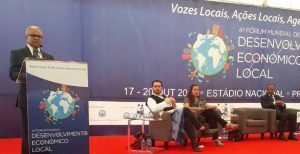 The Minister also delivered a statement at the 4th World Forum of Local Economic Development, held in Cabo Verde today. Minister Asim delivered the statement in the Plenary Session of the Forum under the theme, “Building sustainable cities for locally-rooted investment, decent jobs, services and inclusive growth.”

In his statement, the Minister stressed on the need to build sustainable cities to attract investments. He mentioned that building sustainable cities is deeply rooted in societies which is based on providing basic services to the people, while keeping a focus in the environment. Sharing the achievements of the Maldives in the domestic arena, Minister Asim stated that a multitude of harbours, infrastructure projects and basic services has already been initiated in a number of islands.

Highlighting on the progressive growth Maldives has achieved over the years, Minister Asim mentioned the sustainable development policies it has employed in key economic sectors. In this regard, he highlighted the pole and line fishing practiced in the fishing industry, and the establishment of safeguards to minimize the environmental impact of tourism. Minister Asim reiterated the commitment of the Government of Maldives in working with the partner countries and other organizations in the spirit of mutual understanding and respect, towards creating more developmental and investment opportunities in the country.

In continuing his statement, Minister Asim described financing for development as a major obstacle for small island states and small scale economies like the Maldives. He described climate change and sea-level rise as a threat to the very existence of small island states and stressed on the Maldives’ advocacy role in climate change as the Chair of the Alliance of Small Island States (AOSIS). He expressed his gratitude to the Government of Cabo Verde, for the special focus on the Small Island Developing States in the Forum.

With reference to the achievements of the Maldives in the international arena, Minister Asim stated that the Maldives has completed two successful terms on the United Nations Human Rights Council from 2010 to 2016, where a number of initiatives were put forward on environment and climate change.

In concluding his remarks, Minister Asim once again thanked the Government and the people of Cabo Verde for hosting the Forum and expressed his interest in following up on the meeting’s deliberations contributing to the overall progress of our countries’ social and economic development.