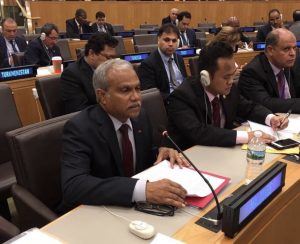 The Minister of Foreign Affairs, Dr. Mohamed Asim participated in the Annual OIC Foreign Minister’s meeting held on the margins of the Seventy Second Session of the United Nations General Assembly.

While speaking at the meeting, Minister Asim reflected on some of the pressing challenges faced by the Muslim world and called for urgent action, particularly on the issue of Rohingya Muslims. He called on the Government of Myanmar to respect its human rights obligations under international law, international humanitarian law and human rights covenants. He further called on the Muslim Ummah to take appropriate steps to stop the genocide and ethnic cleansing in Rakhine State. Minister noted that the Maldives has launched nationwide activities to raise funds to help the Rohingya Muslims and added that the Government has also ceased all trade ties with Myanmar, until it takes measures to prevent the atrocities being committed against Rohingya Muslims.

While speaking on the Palestinian issue, Minister called on the Occupying Power, Israel, to respect its international obligations in particular to the United Nations Security Council resolution 2334 and reiterated its call for a two-state solution recognizing the sovereign and independent State of Palestine, based on the 1967 borders with East Jerusalem as its capital.

In his speech, Minister Asim also spoke about the challenges of Islamophobia and the need for the organisation to stand united in sending across the message of Islam as a religion of peace.

Maldives, as the Chair of AOSIS convenes interactive dialogue for SIDS with...Foreign Minister speaks at the Annual Meeting of the Ministers of Foreign Affairs...
Scroll to top