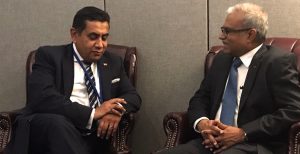 Minister of Foreign Affairs, Dr. Mohamed Asim met with the Minister of State for the Commonwealth and the United Nations of United Kingdom, Lord Ahmed of Wimbledon this afternoon. Both Ministers discussed on enhancing cooperation in areas such as counter terrorism, trade and international issues of mutual interest.

The Meeting was held during Minister Asim’s visit to New York to attend the high-level segment of the 72nd Session of the United Nations General Assembly.

Minister of Foreign Affairs highlights the importance of partnerships and leadership,...Maldives assumes chairmanship of the UN Shark Coalition
Scroll to top