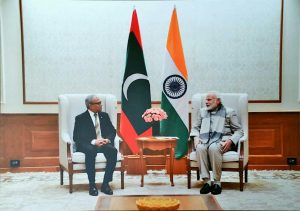 Minister of Foreign Affairs, H.E. Dr. Mohamed Asim has undertaken an official visit to India, as the Special Envoy of His Excellency the President of the Maldives.

During these meetings, both sides reflected on the close friendly relations between the Maldives and India.

Minister Asim conveyed greetings from His Excellency President Abdulla Yameen Abdul Gayoom to His Excellency the Prime Minister of India. Highlighting President Yameen’s “India First Policy,” Minister Asim reiterated the importance of further strengthening the historical ties between the two countries. He further expressed gratitude to the Government of India for their valuable contribution towards the socio-economic development of the Maldives. Prime Minister Modi assured that the Maldives has, and will always remain, a close friend of India. Further, the Prime Minister assured that India would extend its support in all areas of cooperation. 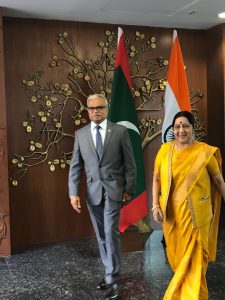