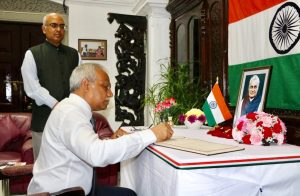 The Minister of Foreign Affairs of the Republic of Maldives His Excellency Dr Mohamed Asim, today signed the book of Condolences for late former Prime Minister of India, Mr Atal Bihari Vajpayee opened at the Embassy of India in the Maldives.

In his message he stated, “it is with great sympathy that we learnt about the sad demise of the late former Prime Minister of India Mr Atal Bihar Vajpayee. At this hour of grief, the government and the people of Maldives join me in expressing our heartfelt condolences to the government and people of India for the irreplaceable loss. Mr Vajpayee’s profound and selfless service was not only limited to his beloved nation but to the region as well. His visit to the Maldives in 2002 is testimony to his efforts in fostering good neighbourly relations.

Further he mentioned, “today, we offer our deepest respect and pay tribute to his vision of a closer knit South Asia and his leadership in striving to achieve it.”

PRESIDENT YAMEEN CALLS FOR POLITICAL DIFFERENCES TO BE PUT ASIDE TO GIVE WAY...PRESIDENT PARTICIPATES IN THE CEREMONY TO MARK THE COMPLETION OF ROAD DEVELOPMENT...
Scroll to top