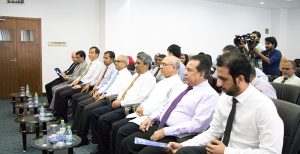 Speaking at the event, the Ministry reflected on the important role played by FOSIM in building the capacity of the foreign service to deliver the foreign policy objectives of the Government. He also congratulated the Team at FOSIM for the diligent work in preparing the two publications.

The FOSIM Quarterly – to be published four times every year – aims to generate meaningful and informed conversation and dialogue about the processes, the contexts, and thought processes involved in foreign policy making. The perspectives are offered by foreign service officers.

The resident Ambassadors of China, India, Sri Lanka, Japan and Bangladesh, and representatives of the Embassy of Saudi Arabia, JICA, and the UNICEF Representative, attended the event held at the Ministry.

FOSIM was established on 16 January 2014, by President Yameen Abdul Gayoom, under the administrative structure of the Ministry of Foreign Affairs, with the aim of promoting professionalism in the foreign service.

Foreign Affairs Minister remarks in response to the outcome of the TIP 2017...President appoints Permanent Representative to the United Nation, Ambassador...
Scroll to top