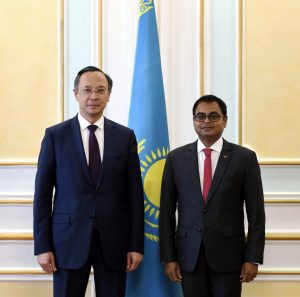 At the meeting held at the Ministry of Foreign Affairs of the Kazakhstan this morning, both Ministers underscored the importance of strengthening bilateral ties between the two countries and in this regard, agreed to collaborate on areas of tourism, education, environment, climate change and energy.

At the meeting, Minister Thorig conveyed greetings and well wishes from His Excellency President Abdulla Yameen Abdul Gayoom to the Government and the people of Kazakhstan and hailed Kazakhstan’s active role and contribution to the international multilateral system. Minister Abdrakhmanov expressed support to the priorities pursued by the Maldives towards promoting multilateralism and its active engagement at the United Nations.

Minister Thoriq is accompanied by Mr. Ahmed Suzil, Assistant Director at the Ministry of Foreign Affairs.