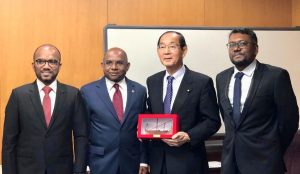 At the meeting held at the Ministry of Environment of Japan, Minister Shahid recognized and commended the role of Japan in the global arena in pushing for action against climate change. The Minister further thanked the Government of Japan, for the continuous assistance to the Maldives in building the resilience and disaster risk reduction of Maldives.

Japan reassured commitment to continue assisting the Maldives and both ministers discussed possibility of new projects in areas such as coastal protection, water supply networks and sanitation mechanism.