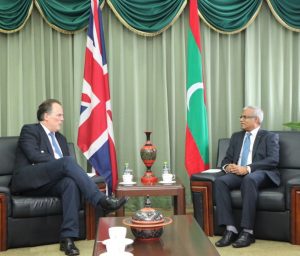 Minister of State for Asia and Pacific at the Foreign and Commonwealth Office of the United Kingdom, Rt. Honourable Mark Field MP paid a courtesy call on the Minister of Foreign Affairs, His Excellency Dr. Mohamed Asim.

During the meeting held at the Ministry of Foreign Affairs this afternoon, discussions focused on ways to further strengthen and enhance the existing bilateral relations between the two countries, particularly in the field of aviation security, countering terrorism and violent extremism and issues related to climate change.

Minister of State, Rt. Honourable Mark Field MP, was accompanied by His Excellency James Dauris, Ambassador of the United Kingdom to the Republic of Maldives, Mr. Philippe Dickinson, Second Secretary of British Embassy in Colombo and Mr. Daniel Johnson, Private Secretary to the Minister of State for Asia and Pacific at the Foreign and Commonwealth Office.

Joint Secretary at the Ministry of External Affairs of India,Mr. Dinesh K. Patnaik...Ambassador of the European Union calls on Foreign Minister Asim
Scroll to top