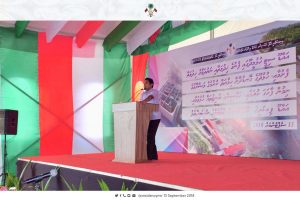 President Abdulla Yameen Abdul Gayoom has stated that his efforts are towards serving the nation, noting that he aspires to continue his services in the future. The President made this remark while speaking at the ceremony held this evening to mark the completion of five projects in Hulhumeedhoo of Addu City.

During his speech President Yameen reiterated that his utmost priority is to fulfil the needs of the Maldivian people. The President said that his efforts are aligned with thousands of people, their dream, hopes and aspirations. President Yameen also highlighted milestones achieved by his administration in realizing the dreams of the people. The President also noted that he will always be a leader who brings hope for the citizens.

In his speech the President noted that development projects used to be focused in the capital city Male’ and that today his administration has changed that, and brought development and progress to all parts of the country. The President also announced plans to build 500 housing units in each city in the coming years.

President Yameen further noted that every citizen is equal and reassured that justice will be served accordingly.

During today’s ceremony the President initiated sewerage services, water services, inaugurated housing units and the Addu Fisheries Complex, and marked the completion of the shore protection project in Hulhumeedhoo.

During his current visit to Addu and Fuvahmulah the President will also visit Hithadhoo and inaugurate sewerage services, housing units, nature park and solar hybrid power system. He will then visit Feydhoo and inaugurate water services of Feydhoo, Maradhoo, and Maradhoo-Feydhoo and mark the completion of land reclamation project in Feydhoo.