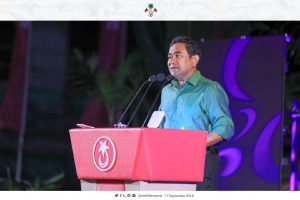 Noting that fulfilling dreams of the youth are his priority, President Abdulla Yameen Abdul Gayoom has stated that bringing the Maldives to the frontlines in the world, in terms of development, is his ambition. The President made this remark while addressing the gathering at the function organized by Progressive Party of Maldives in Hulhumale´.

In his speech, the President announced plans to build International Financial Centres and Business Centres in the Hulhumale´ Youth City. He further said that his dream is to make the Maldives the most outstanding in the region and in the world.

In his speech, President Yameen highlighted the numerous development projects carried out across the country for youth empowerment. He especially noted the housing schemes targeted for the country’s youth. In this regard, President Yameen underscored that the Hiyaa project and Hiyaa Accomplished project, two of the administration’s housing schemes, were planned as total solution projects for the housing problems being faced today.

Speaking at the function, the President also shared his vision of making the Maldives more technologically advanced in the coming years, by building ICT parks in all parts of the country. He further informed of plans to reduce internet usage prices at least by 30%.

Tweet
September 11, 2018/by Niharika Sharma
https://www.maldiveshighcom.in/wp-content/uploads/2021/02/Logo-High-Commission-of-the-Republic-of-Maldives.png 0 0 Niharika Sharma https://www.maldiveshighcom.in/wp-content/uploads/2021/02/Logo-High-Commission-of-the-Republic-of-Maldives.png Niharika Sharma2018-09-11 19:00:062018-09-12 15:03:50MY DREAM IS TO MAKE THE MALDIVES AMONG THE MOST ADVANCED IN THE WORLD – PRESIDENT YAMEEN