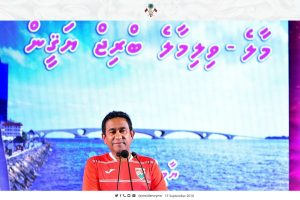 President Abdulla Yameen Abdul Gayoom has stated that it is his dream to make the Maldives the most honourable, economically self-sufficient, the most outstanding nation in this entire South Asian region. The President made this remark while addressing the gathering at the function organized by Progressive Party of Maldives in Villingili.

In his speech, President Yameen highlighted the numerous projects carried out across country especially for youth empowerment and wellbeing. In this regard, the President announced plans to develope an international racing track in Villimale´, and emphasized future plans to develope a world-class surfing destination in Thanburudhoo Island, catering to the needs of the talented Maldivian surfers.

In his speech, President Yameen highlighted the numerous development projects that are being carried out in the nation to meet the housing needs of the people, especially noting the administration’s housing schemes targeted for the country’s youth.

In this regard, President Yameen said that the “Hiyaa” housing project in the Hulhumale´ youth city will continue into “Hiyaa Accomplished” project to be carried out in Villimale´ Phase 2. He also reiterated that the administration’s two housing schemes were planned as total solution projects for the housing problems being faced today. He further underscored that Hiyaa Accomplished project would ensure solutions for 315,000 Maldivians, and is directly linked to the hope of Maldivian youth and all those in need of housing.

Moreover, President Yameen reiterated that the administration would never tolerate any action that may impact the independence and sovereignty of our nation.

Tweet
September 15, 2018/by Niharika Sharma
https://www.maldiveshighcom.in/wp-content/uploads/2021/02/Logo-High-Commission-of-the-Republic-of-Maldives.png 0 0 Niharika Sharma https://www.maldiveshighcom.in/wp-content/uploads/2021/02/Logo-High-Commission-of-the-Republic-of-Maldives.png Niharika Sharma2018-09-15 18:49:042018-09-19 12:50:20MY DREAM IS TO MAKE THE MALDIVES THE MOST OUTSTANDING NATION IN THIS ENTIRE REGION – PRESIDENT YAMEEN

PRESIDENT YAMEEN CONGRATULATES THE NATIONAL FOOTBALL TEAM ON WINNING THE SAFF...PRESIDENT WILL PARTICIPATE IN THE “MNU PRESIDENTIAL DEBATE 2018”...
Scroll to top