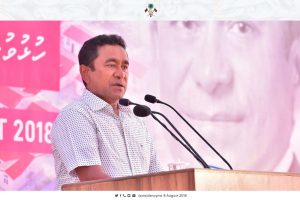 President Abdulla Yameen Abdul Gayoom called on all politicans to refrain from toying with the expectations of the community. The President made the remark while speaking at the function held this evening to mark the completion of the road development project and inauguration of the housing project in Villingili Island, North Huvadhu Atoll.

While addressing today’s gathering the President stated that it was not appropriate to make excuses for unmet commitments by blaming them on changing circumstances.

Highlighting the importance of delivering on community requirements, he highlighted some milestones the Administration has successfully achieved.

He spoke about some of the Administration’s plans for the next presidential term. Likewise he stated that the Administration would further develop the tourism sector through increased beds and resorts; which will further empower our youth, he said.

Concluding the speech President Yameen noted the importance of the vote. He highlighted that it was the right of every individual and that he would work to ensure this right to everyone citizen.

During his current three-day visit the President yesterday inaugurated the harbour and attended the ceremony to mark the completion of the beach protection project in Madaveli Island and Faresmaathoda Island. The President also initiated the land reclamation for construction of the Faresmaathoda airport.

President Yameen also took part in the ceremony to mark the completion of the beach protection project, inaugurated the harbour, initiated the sewerage service system and inaugurated the housing project in Gaddhoo Island.

The President will also inaugurate the Fishermen’s Marina in Kooddoo Island tomorrow.