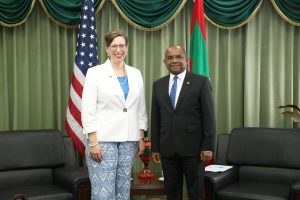 Her Excellency Alaina Teplitz, Ambassador of United States of America to the Republic of Maldives, called on the Foreign Minister, His Excellency Abdulla Shahid, today.

At the meeting held at the Ministry of Foreign Affairs, the Minister congratulated the Ambassador on her appointment and discussed about ways to further strengthen and enhance the existing bilateral relations between the two countries on issues of bilateral significance such as institutional reform and defence cooperation.

Ambassador Teplitz also expressed the US Government’s readiness in working closely with the Government of Maldives to assist in the successful implementation of the administrations ambitious 100 day agenda and further strengthening democratic institutions, protecting freedom of expression, and ensuring the rule of law.

Minister also highlighted the interest of the government to work closely with US, India and other Indian Ocean neighbors to secure a broader Indo-Pacific peace and security strategy in the region and assured Ambassador Teplitz that the Maldives will continue working with the United States on important global issues of mutual concern, including counter-terrorism, respect for fundamental human rights, as well as adaptation to climate change issues.