The High Commission of the Republic of Maldives invites all interested parties to submit bid proposal for four wheeler vehicle. The proposals should meet the following condition/details and shall be submitted through email to admin@maldiveshighcom.in on or before December 31, 2022 (Saturday) at 1600 hrs.

The High Commission of the Republic of Maldives invites all interested parties to submit bid proposal for (2) four wheeler vehicles of 7 seater and 5 seater. Preferred making of the vehicle are KIA and Toyota which is of Hybrid technology or comparatively low on emission. The proposals should meet the following conditions/details and shall be submitted through email to admin@maldiveshighcom.in on or before October 28, 2022 (Friday) at 1600 hrs.

At the invitation of the Minister of Foreign Affairs of the Republic of Maldives Abdulla Shahid, the External Affairs Minister of India Dr. S. Jaishankar paid an official visit to the Maldives on 20-21 February 2021. He was accompanied by a delegation of senior officials from the Government of India.

During the visit, the External Affairs Minister called on the President of the Republic of Maldives Ibrahim Mohamed Solih. He also called on the Speaker of the Peoples Majlis, President Mohamed Nasheed. He also held meetings with Ministers of Foreign Affairs, Defence, Finance, Economic Development, Sports, and National Planning, Housing and Infrastructure

Minister Shahid and Minister Jaishankar met on 20 February 2021 in a warm and friendly atmosphere, reflective of the renewed dynamism over the past two years in the traditionally close relationship. Given that both countries are celebrating the 55th anniversary since the establishment of diplomatic relations between the Maldives and India, the Ministers reaffirmed their commitment to further deepening and strengthening the relationship, and exploring new areas of cooperation. The Ministers recalled a number of High-Level visits since November 2018, and noted the various interactions despite the COVID-19 pandemic. They noted with appreciation that in the last two years, the leadership of President Ibrahim Mohamed Solih and Prime Minister Narendra Modi has steered the Maldives-India partnership into a new era of high ambition and cooperative action for mutual benefit.

Foreign Minister Shahid reiterated the deepest appreciation to the Government and the people of India for gifting an additional 100,000 doses of COVISHIELD vaccine to the people of Maldives, in addition to the 100,000 doses gifted to the Maldives on 20 January 2021. Minister Shahid also thanked the Government of India for the various kinds of support extended to the people and Government of Maldives, during the COVID-19 pandemic, especially noting the financial assistance of $250 million for budget support.

The Ministers agreed that people-to-people contact is the backbone of the bilateral relationship. The resuming of regular scheduled flights between the Maldives and India under the Air Travel Bubble established in August 2020, has enabled increased interaction for mutual benefit and enhanced the close relationship between the two countries despite this pandemic time. Minister Shahid appreciated the establishment of the Air Travel Bubble which enabled the travel of Maldivians to India for medical treatment, despite Indian borders being closed. The Air Travel Bubble has also enabled an increasing number of Indian tourists to visit the Maldives, making India the number one tourist-source market during 2020 and continuing to occupy the top spot in 2021 so far. Currently, over 45 flights per week are operating between the Maldives and seven destinations in India. Minister Shahid noted that the increasing number of tourists from India has supported the recovery efforts from the pandemic. He also noted that the development of Hanimaadhoo Airport and Addu Gan Airport being financed under the $800million Line of Credit will contribute towards strengthening connectivity, and facilitate more visitors to the Maldives.

The Ministers discussed the status of implementation on the various infrastructure development projects financed through the Government of India Lines of Credit, which are of the highest priority to the Government of Maldives. The Contract for construction of roads and drainage systems in Addu City was awarded during the visit. This is the first of the eight major infrastructure projects being implemented jointly by the Maldives and India to be awarded. Within six months of the announcement of India’s financial support to the Greater Malé Connectivity – Malé to Thilafushi Link Project (GMCP), the tender was also published this week by the Ministry of Finance. The Ministers also expressed satisfaction that the Construction of Water and Sanitation infrastructure on 34 islands will also be awarded this month, and that the Detailed Project Report for the Hanimaadhoo Airport expansion project has been finalised. Several of the major projects will soon be completing the tendering stage, and both Ministers agreed on the importance of close coordination for accelerating progress.

Foreign Minister Shahid noted the key role that India continues to play in the socio-economic development of the Maldives. He noted that the High Impact Community Development Projects and Small Grants Projects are very beneficial for the local communities. The Memorandum of Understanding for the establishment of a Geydhoshu Mas Plant in Noonu Atoll Kendhikulhudhoo was signed during this visit. This is the twelfth project to be financed under the High Impact Community Development Projects scheme. Foreign Minister Shahid requested for a second tranche of financing under the scheme. During this visit, the two Ministers jointly inaugurated two projects financed with Indian grant assistance in Hulhumalé – the development of pathways, lighting and seating, as well as soft scaping of two sectors of the Hulhumalé Central Park, and the renovation of the Hulhumalé Westside Jetty.

The Ministers also discussed progress on the National College of Policing and Law Enforcement Studies being built in Addu City. Despite COVID-19, the project has made significant progress and is likely to be inaugurated in April 2021. Both Ministers also noted progress on institutionalising linkages between police organisations in the Maldives and India to support collaboration and cooperation in training management, and exchange of trainers and trainees between both countries.

The Ministers also discussed the importance of an effective multilateral system as a key factor in tackling global challenges and agreed on the need to pursue reform of the main UN bodies, including the General Assembly and the Security Council. The Maldives reiterated its support for India’s candidature for permanent membership of an expanded and reformed UN Security Council. India reiterated its support for the Maldives candidature for the Presidency of the seventy-sixth session of the General Assembly. Both Ministers agreed to cooperate and work together on addressing global challenges such as the threat of climate change, in the lead up to the 26th session of the Conference of Parties to the UNFCCC to be held in Glasgow, UK, in November 2021.

Underscoring the importance of defence and security cooperation, the Ministers agreed on the importance of maintaining peace and security in the Indian Ocean Region. They further agreed to strengthen coordination in enhancing regional maritime security, including on combatting terrorism in all its forms and manifestations, including cross border terrorism and maintaining peace in the region to ensure freedom of navigation in the Indian Ocean. The Ministers also agreed to work together to convene the first meeting of the Joint Working Group on Counter Terrorism, countering Violent Extremism and De-radicalisation at the earliest.

Minister Shahid welcomed the offer of a new line of credit of $40million for development of sports infrastructure and noted that it will contribute in creating new sports infrastructure. A special event was also held at Ekuveni track – newly renovated with financing through Indian grant – to celebrate the increasingly strengthening cooperation in the area of sports. Minister Jaishankar joined the Speaker of Majlis President Mohamed Nasheed, the Minister of Foreign Affairs, Minister of Youth, Sports and Community Empowerment Ahmed Mahloof, Members of Parliament, and Presidents of sports associations, at this event.

An amendatory agreement for the $40million Line of Credit signed in 2011, was signed during the visit. Under this amendatory agreement, the unutilized amount of $25.64 million under this Line of Credit, will be directed towards roads development projects in the Maldives. And a $50 million Dollar Credit Line Agreement between the Government of Maldives and EXIM Bank India was signed for defence projects. A Letter of Intent between Fahi Dhiriulhun Corporation and EXIM Bank was also signed during this visit towards extending a credit facility under EXIM Bank’s Buyer’s Credit scheme to support the design and construction of 2000 social housing units in Hulhumalé. And in this context, both Ministers noted with happiness, the increasing interest of Indian investors in the Maldives.

Other MoUs signed during the visit include cooperation between Public Service Media and Prasar Bharati, and between the Ministry of National Planning, Housing and Infrastructure, Maldives, and the Ministry of Housing and Urban Affairs, India on Sustainable Urban Development. Both Ministers agreed that these MoUs would serve to further strengthen the already strong bilateral cooperation, by expanding into new fields of cooperation.

The External Affairs Minister of India also reviewed the various facets of defence and security cooperation with the Minister of Defence Mariya Didi.

During this visit, an Agreement to develop, support and maintain a Maldives National Defence Force Coast Guard Harbour at Sifvaru (UthuruThilafalhu) was also signed. This Agreement was signed pursuant to the request Government of Maldives made in April 2013 for support and cooperation of the Government of India to assist the Government of Maldives for enhancing the capability of the Defence Forces of the Maldives in exercising jurisdiction and undertaking maritime surveillance of its EEZ and islands; and subsequent requests made in October 2015 and March 2016. Further, the Agreement is pursuant to the Action Plan for Defence Cooperation signed on 11 April 2016 between both countries, and subsequent discussions held during the Defence Cooperation Dialogues in July 2016 and January 2019, and in accordance with the Terms of Reference for the Project discussed during the Joint Staff Talks in June 2018, January 2019, and June 2019, and agreed in September 2019.

The External Affairs Minister of India held a joint meeting with the Minister of Finance Ibrahim Ameer, Minister of National Planning, Housing and Infrastructure Mohamed Aslam and Minister of Economic Development Fayyaz Ismail, to discuss in detail, the various infrastructure projects and economic activities being undertaken in cooperation with India.

Guided by mutual respect and trust, the Maldives-India partnership has grown even stronger during the COVID-19 pandemic. The visit highlights the strong and shared commitment of both sides to strengthen the bilateral partnership that is anchored in common civilisational roots, cultural affinities, and the shared values of democracy and the rule of law. 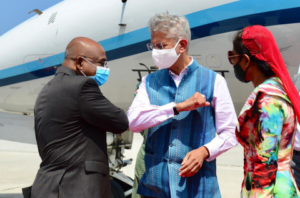