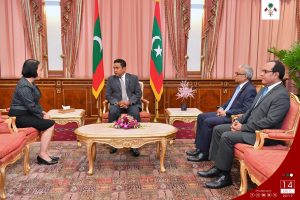 The Non-Resident Ambassador of the Kingdom of Thailand to the Republic of Maldives, Her Excellency Chulamanee Chartsuwan, presented her Letter of Credence to President Abdulla Yameen Abdul Gayoom, this morning, at the President’s Office.

During the call, the President conveyed greetings and good wishes to the King of Thailand, His Majesty King Maha Vajiralongkorn and Prime Minister, H.E. Prayuth Chan-ocha. He iterated that the Government of Maldives is firmly committed to cultivate and maintain the long-standing relations between the Maldives and Thailand. Discussions mainly revolved around exploring avenues to further promote Thai investments in the Maldives.

The Ambassador thanked the President for his keenness to seek more Thai investments in the Maldives, and assured his sound resolve to facilitate in his ambassadorial capacity on this front.

Ambassador H.E. Ahmed Mohamed meets with the High Commissioner of GhanaNew Non-Resident Ambassador of Egypt presents his credentials to the Presid...
Scroll to top