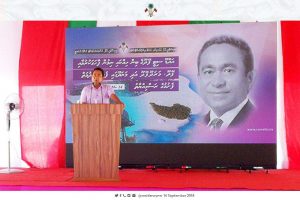 President Abdulla Yameen Abdul Gayoom has stated the nothing is more important than defending our nation’s freedom and independence. The President made this remark while speaking at the ceremony held this morning to inaugurate water service in Feydhoo, Maradhoo and Maradhoo-Feydhoo, and mark the completion of the land reclamation project in Feydhoo.

Speaking in this regard the President called upon everyone to prioritise protecting our religion and maintaining the peace and harmony of the nation. He also appealed to everyone to strive towards achieving a united and peaceful society.

At the ceremony, the President underscored his ambition of bringing a new era of development to the country. He especially highlighted the development projects planned for the advancement of the health sector.

In this regard he noted that developing the area of telemedicine and establishing a specialised hospital for women was part of his upcoming electoral pledges.

Moreover, the President reiterated plans to utilise renewable energy as 50% of the power source needed in the inhabited islands.

During the tour, the President is scheduled to visit Fuvahmulah City to initiate sewerage services, water services, inaugurate housing units, nature park and to mark the completion of harbour revetment project.