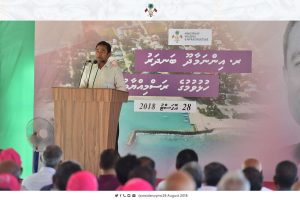 President Abdulla Yameen Abdul Gayoom has stated that the aim of this administration is to expand the country’s progress to the entire population so that it is shared by every single citizen. He made this statement this morning, while addressing the public at the ceremony held to inaugurate the Harbor in Innamaadhoo Island, North Maalhosmadulu Atoll.

Speaking further, the President stated that our biggest blessing was our Islamic faith, and called upon everyone to always safeguard our Islamic values.