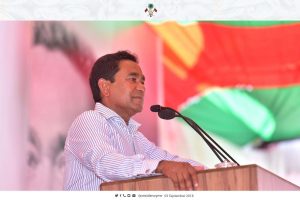 President Abdulla Yameen Abdul Gayoom has stated that the youth generation is the nation’s greatest asset. The President made this remark while speaking at the function held this morning to mark the completion of the road development project in Mahibadhoo Island, South Ari Atoll.

President Yameen highlighted the efforts put in by the administration in providing more educational opportunities for the youth. The President also noted that the groundbreaking progress being achieved in the education sector is the positive results of this administration’s policies.

Speaking at the ceremony, President Yameen also highlighted the top achievements of Maldivians in the top Universities of the world and in international examinations.

President Yameen also noted the government’s efforts in providing scholarships and other educational opportunities to the youth generation.

President Yameen is currently on a two-day visit to some islands in Ari Atoll and South Nilandhe Atoll.

As part of the tour, President Yameen visited Dhangethi Island earlier this morning and inaugurated the island’s harbour and clean water services. The President is also scheduled to visit Maamigili Island and inaugurate the sewerage services system in the island.

President Yameen will also to visit Mathiveri Island, Thoddoo Island and Kudahuvadhoo Island as part of this tour.

PRESIDENT PARTICIPATES IN THE CEREMONY TO MARK THE COMPLETION OF ROAD DEVELOPMENT...PRESIDENT YAMEEN VISITS MATHIVERI ISLAND
Scroll to top