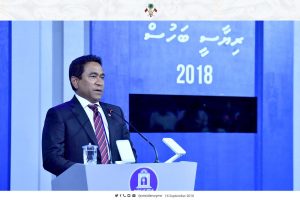 President Abdulla Yameen Abdul Gayoom has stated that the Administration will not tolerate any action that weakens the sovereignty of the Maldives. He made this remark while responding to a question within the “MNU Presidential Debate 2018” held this evening at the MNU Central Auditorium.

Speaking at the debate, President Yameen noted that the Administration would not allow outside interests to interfere with the nation’s affairs. He reiterated that Maldivians would not abandon the nation’s identity and embrace religions other than Islam.

President Yameen went on to highlight that development projects were being carried out with the intention of fulfilling the needs of the Maldivian people, noting that he does not believe individual islands should be left to develop on their resources alone; that development can only be fully realised by utilising national resources in an equitable manner.

During the debate the President highlighted the positive outlook given by Moody’s Investors Service – which had assured that the Maldives has the capacity to repay the loans secured for development projects.

Highlighting that development strides cannot be undertaken without the use of loans, he stated that world powers such as the United States of America and United Kingdom also welcome foreign investment. Furthermore, he noted the importance of foreign investments for small states like the Maldives, and stated the nation’s yearly gross revenues currently values at 20 billion Maldivian Rufiyaa and that this amount would quadrupled by the year 2023 to a value of 82 Billion Maldivian Rufiyaa.

President Yameen said that developing the “Greater Male’” as a livable township for a large portion of the population was in no way an initiative to force citizens who wish to live throughout the country to move to the region; but to provide better options and conditions for those living in Malé while paying increased rents.

Noting that the current decentralised system has not efficiently facilitated equitable development across the nation, President Yameen noted that politicians and public servants should put forward the interest of the citizens, their constituents, above politics.

The President also noted that while resolving the issue of gang violence required long term efforts, such incidents had decreased 35 percent within the past 5 years.
Emphasising that offenders also have rights, President Yameen stated that funds spent on rehabilitation should not be reduced; rather the Administration would increase spending if necessary in order to bring productive citizens back to society, the President said.