Parliamentary Vice Minister for Foreign Affairs of the Government of Japan,Mr. Iwao HORII arrived in the Maldives for an official visit. 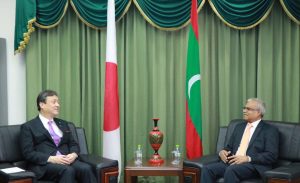 During the meeting, Minister Asim and Vice Minister HORII agreed to work together to further strengthen the existing cordial relations between Maldives and Japan.

Both Ministers also discussed on attracting Japanese investments to the Maldives, improving connectivity, promotion of trade and tourism, increasing people-to-people contact and collaboration in the multilateral arena of mutual interest including climate change, human security and sustainable development.

Mr. Iwao HORII is visiting the Maldives, in connection with the 50th anniversary of the establishment of diplomatic relations between the Maldives and Japan.