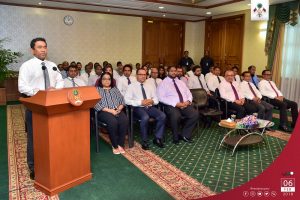 President Abdulla Yameen Abdul Gayoom addressed the nation regarding the current situation in the Maldives.

Addressing the nation today via local media, the President reiterated that during the current State of Emergency, there is no enforcement of a curfew; and that general movements, services and businesses are not affected, nor is travel in and out of or within the country affected.

Highlighting the reasons for the declaration of the state of emergency, the President stated that ensuring all State institutions are able to function as per the Constitution and laws of the Maldives, is a duty vested in the President, under Article 115 (a) and (c) of the Constitution. The President also highlighted the challenges faced by the administration and State institutions, as a result of the Supreme Court’s Order issued on 1 February 2018, in carrying out the responsibilities of the State accordingly.

In his address, the President noted that the Supreme Court’s Order was issued hastily for the immediate release of nine detainees whose prosecution were already concluded.

The President underscored that the administration has made several attempts to have discussions with the Supreme Court to share concerns of the State in the implementation of the Order, due to its serious implications to the State and to the law and order situation in the country.

The President appealed to all Maldivians to exercise patience and be cooperative towards the State institutions and law enforcement agencies, in order to assist the President in carrying out his duties in the best interest of the Maldivian people.

Declaration Of Emergency Has Not Affected Common Life Or Tourism In The Mal...Administration Welcomes the Supreme Court Ruling Revision
Scroll to top