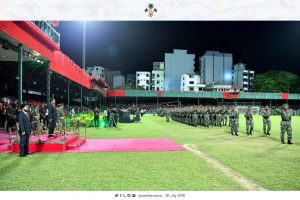 President Abdulla Yameen Abdul Gayoom and First Lady Fathimath Ibrahim have attended the special function held this evening on the occasion of the 53rd Independence Day of the Maldives. The function was held at the Galolhu Stadium.

Upon their arrival, the President and First Lady were received by Minister of Home Affairs Azleen Ahmed and his spouse.

PRESIDENT YAMEEN DECLARES 29TH JULY AS A PUBLIC HOLIDAYWE MUST PUT FORTH OUR NATIONAL RESPONSIBILITY IN THE UPCOMING ELECTION – PRESIDENT...
Scroll to top