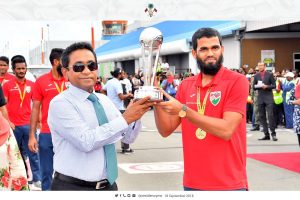 The Maldives’ National Football Team arrived on the first A380 flight that landed at the Velana International Airport, following the inauguration of the new Code F runway.

During the ceremony, the Captain of the Maldives’ National Football Team Akram Abdul Ghanee presented the champion’s trophy to President Yameen.

The President was accompanied by the First Lady, Cabinet Ministers, Parliament members, and senior officials of the government.