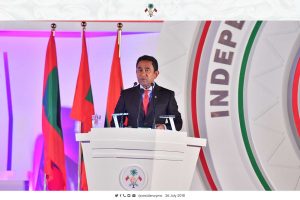 His Excellency President Abdulla Yameen Abdul Gayoom has announced the conclusion of the feasibility studies of the “Hiyaa Accomplished” project proposed as a total solution for housing, and stated that all Maldivians who turn 18 by 2030 will have adequate housing.
During his address to the nation on the occasion of our 53rd Independence Day, he stated that under the “Hiyaa Accomplished” project, every Maldivian above the age of 18 years without a house, and every Maldivian who will turn 18 from this Independence Day until 2030 will get a land allocation of a minimum of 1000 square feet or an apartment unit. He has also stated that in the future there will be no one in Maldives left without adequate housing.
He highlighted that under this initiative to provide adequate housing, Hulhumale’ 2 will be able to accommodate a 100,000 inhabitants. He also stated that all the basic needs of all Maldivian citizens can be achieved within the next 10 years by realizing major infrastructure projects in the Maldives, from airports to transhipment ports to tourism to schools, hospitals and other investments, and by ensuring that sufficiently skilled practitioners are trained in time to meet the job opportunities that will be available from these developmental initiatives.