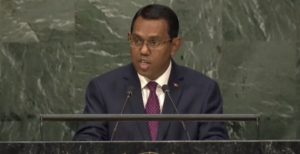 Ahmed Sareer has completed his Master’s Degree from Australia’s Monash University in Foreign Affairs and Trade.