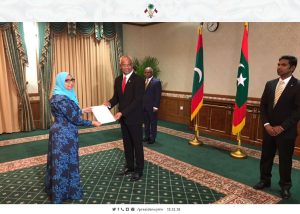 The appointments made are as follows:

President Solih presented the letters of appointment to the new appointees at a ceremony held at the President’s Office this evening.

Delegations from the U.S government engage with the government of Maldives to...PRESIDENT SOLIH DEPARTS ON STATE VISIT TO INDIA; ANNOUNCES PLANS FOR VISA LENIENCY...
Scroll to top