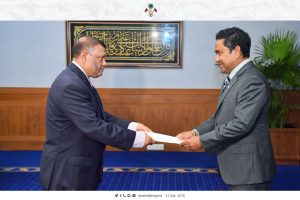 The appointment was made in accordance with Article 158 of the constitution and Article 3 (8) of the “Judicial Service Commission Act” (Act number 10/2008).

President Yameen presented the letter of appointment to Mohamed Saleem at today’s function held at the President’s Office.