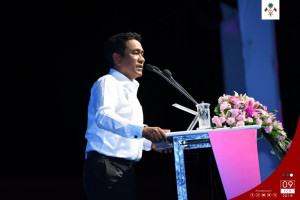 President Abdulla Yameen Abdul Gayoom has called upon everyone to unite and work towards common development goals. The President made this remark while speaking at an event held by the Progressive Party of Maldives this evening. First Lady Fathimath Ibrahim accompanied the Presdient at the event.

Speaking at the function, President Yameen stated that it was his aspiration for the Maldives to be a modern, developed civilisation, while ensuring the financial stability and prosperity of the Maldivian people.

Shedding light on the current situation in the Maldives, the President stated that once the investigation of the events that unfolded following the Supreme Court Order on 1st February 2018 were over, it would be clear to everyone, local and international, that the opposition had in fact attempted to bring about a coup.

OFFICIAL STATEMENT FROM THE GOVERNMENT OF THE REPUBLIC OF MALDIVES ON THE COUNTRY...No Extremist Elements at MPS; Police Responds to False Allegations Made in Press...
Scroll to top