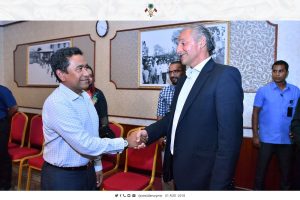 In his speech, the President highlighted that the Maldivian team has already proved their capability to win the competition. In this regard, the President emphasized that Maldives winning the SAFF Championship in 2008 was proof that Maldives is among one of the top football talents in the South Asian region.

THIS ADMINISTRATION ACCORDS HIGH PRIORITY TO THE DEVELOPMENT OF YOUTH AND SPORTS...PRESIDENT YAMEEN DECLARES 19TH AUGUST AS A PUBLIC HOLIDAY
Scroll to top