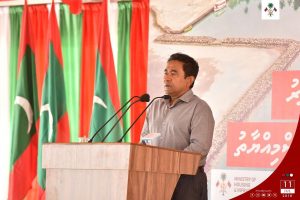 President Abdulla Yameen Abdul Gayoom has urged to put forth the national interest and called upon the people to unite for the development of Maldives despite different political views.  He made this remark while speaking at the function held to inaugurate the harbour in Kolhufushi Island of Mulaku Atoll this morning.

Speaking at the function, President Yameen stated that development can only be brought to a country where peace and harmony is maintained, and reiterated the high priority accorded by this administration to instilling stability in the Maldives, in going forward on its developmental agenda. Speaking in this regard, the President highlighted plans for the development of commercial harbours in Maldives, as part of his economic agenda.

Addressing the public, the President emphasised the importance of improving the country’s health sector, by connecting all healthcare facilities through a telemedicine network. Moreover, President Yameen assured that the administration will increase the senior citizen allowance.

Speaking further, President Yameen acknowledged that the larger percentage of the Maldivian population consists of youth and underscored that this administration is already conducting several projects focused on fulfilling the needs of the youth population. Noting that housing and employment is the top most need of today’s youth, the President highlighted the work being done by the administration to tackle the issue.

Tweet
July 11, 2018/by Maldives Embassy
https://www.maldiveshighcom.in/wp-content/uploads/2021/02/Logo-High-Commission-of-the-Republic-of-Maldives.png 0 0 Maldives Embassy https://www.maldiveshighcom.in/wp-content/uploads/2021/02/Logo-High-Commission-of-the-Republic-of-Maldives.png Maldives Embassy2018-07-11 15:01:572018-07-11 15:01:57PRESIDENT CALLS UPON THE PEOPLE TO UNITE FOR THE DEVELOPMENT OF MALDIVES DESPITE POLITICAL DIFFERENCES

Foreign Minister Dr. Mohamed Asim, Special Envoy of the President of the Maldives,...THE NON-RESIDENT AMBASSADOR OF GHANA PRESENTS HIS CREDENTIALS TO THE PRESID...
Scroll to top