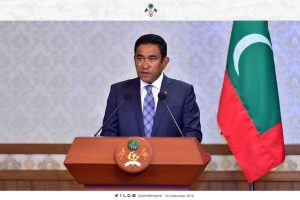 President Abdulla Yameen Abdul Gayoom has declared Tuesday, 18th September as a government holiday, in celebration of the victory of the Maldives’ National Football Team in the SAFF Suzuki Cup.

The Maldives beat India 2-1 in the final match played yesterday.

During a telephone conversation with the team captain, President Yameen lauded the team’s performance during the final match, and expressed gratitude on behalf of the Maldivian people, and on his own behalf, for making the whole nation proud.

PRESIDENT WILL PARTICIPATE IN THE “MNU PRESIDENTIAL DEBATE 2018”... OUTSIDE INFLUENCES CANNOT BE ALLOWED TO INTERFERE WITH INTERNAL AFFAIRS –...
Scroll to top