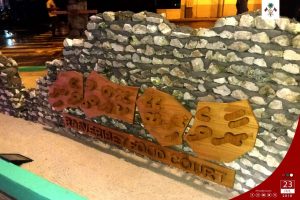 President Abdulla Yameen Abdul Gayoom has this evening inaugurated Raaveribey Food Court. The ceremony was held at Raaveribey Maizaan, on the West Coast of Malé.

The Raaveribey Food Court was developed as part of the administration’s Male’ Redevelopment Plan, to provide social spaces in the capital.

The Food Court was developed by the Ministry of Housing and Infrastructure in association with State Trading Organization (STO).

Following the inauguration, President Yameen took a tour of the Food Court.

President Yameen was accompanied at the ceremony by Cabinet Ministers, Parliament Members and other senior officials of the government.