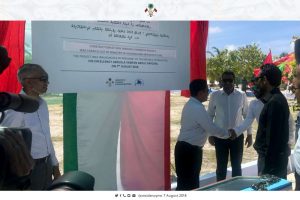 During the ceremony the President unveiled the monuments placed to inaugurate the island’s harbor, and mark the completion of the island’s beach protection project.
During his current three-day visit to some islands of North and South Huvadhu Atoll, the President is scheduled take part in the ceremony to mark the completion of beach protection project and inaugurate the harbour in the islands of Faresmaathodaa and Gaddhoo Islands. Moreover, President Yameen will initiate the services of sewerage system and inaugurate the housing project in Gaddhoo Island.

PRESIDENT YAMEEN BEGINS VISIT TO SOME ISLAND OF NORTH AND SOUTH HUVADHU ATO...ECONOMIC PROSPERITY SHOULD BE BENEFICIAL TO ALL CITIZENS – PRESIDENT YAME...
Scroll to top