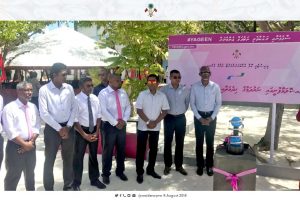 During the ceremony held this afternoon in Kolamaafushi Island, the President unveiled the monuments placed to initiate the sewerage system, and inaugurate clean water services in the island.

During his current three-day visit the President inaugurated the harbour and attended the ceremony to mark the completion of the beach protection project in Madaveli Island and Faresmaathoda Island yesterday. The President also initiated the land reclamation for construction of the Faresmaathoda airport.

The President also took part in the ceremony to mark the completion of the beach protection project, inaugurated the harbour, initiated the sewerage services system and inaugurated the housing project in Gaddhoo Island.

President Yameen is scheduled to take part in the ceremony to mark the completion of the road development project and inaugurate the housing project in Villingili Island.

The President will also inaugurate the Fishermen’s Marina in Kooddoo Island.

PRESIDENT YAMEEN REITERATES THAT ALL ARE EQUAL UNDER THE LAW ADMINISTRATION HAS FULFILLED MALDIVIANS’ ASPIRATIONS — PRESIDENT YA...
Scroll to top