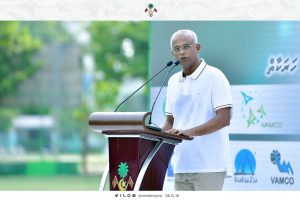 President Ibrahim Mohamed Solih has today launched the National Cleaning Exercise, as pledged in his “First 100 Days Goals”, by clearing the garbage around the Maafannu Stadium.

Vice President Faisal Naseem, Former President Maumoon Abdul Gayoom, senior delegates of the Government, and those representing NGOs and the private sector were also among the high number of participants at today’s event.

Delivering his remarks at the launching event, President Solih appealed to everyone to contribute to this national campaign and take on their personal responsibility of keeping the Maldives clean. He pointed out that our household waste mostly consists of single-use plastic than organic waste, and urged everyone to strive to eliminate single-use plastic from their daily lives.

The President further noted that the shortcut to waste management is actually minimizing it, and encouraged everyone to adopt a minimal-waste lifestyle. He also stated that the administration’s aim is to introduce an environment friendly method of waste disposal.

Highlighting his “First 100 Days’ Goals” President Solih said that the decision to initiate a nationwide cleaning campaign within his first 100 days in office, was made as a result of the administration’s belief that the Maldives can reap the true benefits of our pristine islands only by maintaining our clean environment.

Noting that the Maldives is famous for being a group of islands that upkeeps its environment and purity, President Solih also said that no level of advancement will erase the island-style of the Maldives. The President further said that the only way to maintain this unique characteristic is to prioritize keeping our beautiful surroundings clean.