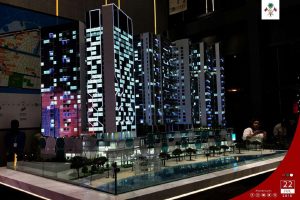 President Abdulla Yameen Abdul Gayoom has this evening launched the Rasfannu Mixed Use Development Project. The ceremony was held at the project site, at Rasfannu Beach.

The Rasfannu Mixed Use Development Project is being carried out as part of the administration’s Malé redevelopment plan.

Four towers of 25-28 storey will be constructed under the Rasfannu Mixed Use Development Project. The luxury towers will consist of 533 residential bedrooms and 228 hotel rooms, as well as retail stores.

Following the project launching, President Yameen took a tour of the show flat, displaying a residential unit of the Coral Boulevard tower.

President Yameen was accompanied at the event by Cabinet Ministers, Members of the People’s Majilis and senior officials of the government.

CEREMONY HELD TO HANDOVER AND RELEASE THE SPECIAL STAMPS COMMEMORATING 45 YEARS...THE NON-RESIDENT AMBASSADOR OF POLAND PRESENTS HIS CREDENTIALS TO THE PRESI...
Scroll to top