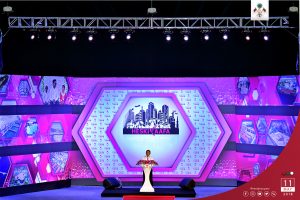 President Abdulla Yameen Abdul Gayoom has asked the Maldivian citizens, to give him a chance in the next Presidential elections to fulfill their dreams and needs. The President made this request while speaking at a function organized by the Progressive Party of Maldives, held this evening at the carnival area.

The President was accompanied at the function by First Lady Fathimath Ibrahim, Cabinet Ministers, Parliament Members and senior officials of the administration.

Highlighting that the Islamic religion had already prescribed numerous principles used in the modern day, such as the democratic system, the President spoke of the importance of the citizen having the right to decide the affairs of the State directly related to them.

President Yameen noted that every leader comes to power with the intention of fulfilling the necessities of the people while maintaining peace in the country. He further stated that if this basis was jeopardized and the leader was unable to reinstate peace in the country, the public will eventually want a change in power.

Speaking in this regard, the President shed light on the upcoming Presidential elections, and highlighted the important specifics that the people need to consider when casting the vote for President.

Furthermore, the President shed light on the development this nation has seen during the past 4 and half years, and stated that this administration has brought back hope and aspiration to the hearts of all Maldivians.

Moreover, President Yameen stated that every citizen has equal rights in this country and that every Maldivian was equal in front of the law. He further stated that the outlook of Maldives is changing, along with the views and opinions of the people, being content with hope for a brighter future.