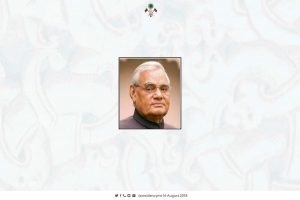 President Abdulla Yameen Abdul Gayoom has sent a message of sympathy and condolences to the President of India, His Excellency Ram NathKovind, following the demise of Former Prime Minister of India, Atal Bihari Vajpayee.

The President’s message reads as follows:

“It was with deep sorrow that I learned of the demise of Former Prime Minister of India, Mr. Atal Bihari Vajpayee, who would not only be remembered for his distinguished service and leadership for his country but also as a scholar who has made immense contribution to literature and art.

We would fondly remember the Former Prime Minister Vajpayee for his contribution to human resource development in the Maldives, and for the memorable visit that he made to the Maldives during his tenure as the Prime Minister of India.

Please accept, Excellency, the assurances of my highest consideration”.