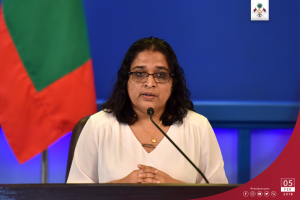 The Minister of Legal Affairs at the President’s Office, Uza. Aishath Azima Shakoor briefed the media today, about the details of the President’s letters. She noted that despite the Attorney General and the Prosecutor General having shared their concerns with the Chief Justice earlier, regarding the challenges faced in implementing the Supreme Court ruling, the issue remains unresolved.

The President’s letters highlight that the Supreme Court Order No. 2018/SC-SJ/01, issued on 1 February 2018, has resulted in an encroachment on the regulatory powers of the State, the disruption of the functions mandated to State institutions under the Constitution, and the infringement of national security and public interest, and if implemented, which would potentially lead to an undermining of the supremacy of the Constitution of the Republic of Maldives.