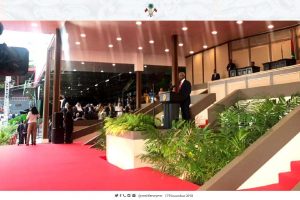 President Ibrahim Mohamed Solih has announced the first 100 days’ goals set by his administration. The President made this announcement in his address to the nation following the inauguration.

In his speech, the President assured that by the end of the first 100-day period, electricity prices will be reduced, tuition fees will be fully covered for undergraduate students, and school students will be provided free breakfast. He also stated that his administration will allow Pension funds to be utilized by Hajj pilgrims.

Continuing in this regard, the President noted that the issuance of fishing permits for foreigners will cease, and those import duties levied on agricultural capital will also be eliminated during his first 100 days in office.

In addition, the President stated that the Maldives will further consolidate its global position as a leader in climate action amongst Small Island Developing States, and will strive to become the leading advocate for this cause. He also said that green tax will be introduced in the Maldives, and its revenues will be funneled towards environmental protection programmes.

Further announcing his administration’s 100 days’ goals, President Solih noted that an equitable housing programme will be established, as informed by needs assessments conducted by councils. Moreover, he said that within 100 days, an air ambulance service will be launched across the Maldives to accelerate emergency response. Additionally, he noted that the National Mental Health Institute will be established where health costs will be covered by Aasandha. He also stated that Councils will reclaim its autonomy that has been eroded.

Looking back on the past 5 years, the President noted that it is rather apparent that the Maldives had regressed into a policy of isolationism, estranged from the wider international community. The President also noted that everyone has a national responsibility, sacred and duty-bound, to preserve the sovereignty and hold up national security. Further President Solih noted that the foreign policy of the Maldives will be fundamentally hinged on advancing policies that have a stake in the progress and welfare of our home. President Solih also noted that his administration’s foreign policy will be formulated on the basis of human rights, democracy, and climate diplomacy.

Speaking in this regard the President highlighted that he will endeavor to fortify the existing ties the Maldives has had with India and other regional countries. He also said that the Maldives will hereupon bolster its shared role to retain enduring peace and harmony of the Indian Ocean. Further President Solih emphasized that the Maldives is open and willing to establish diplomatic relations, and strengthen existing ties with all countries that wish to form mutually beneficial development partnerships.

Highlighting the coalition government that comes to power today, the President noted that with the blessings of Almighty Allah, work together to bring new heights of progress and development. He also assured to not leave room for it to be said that he did not take sufficient action to try and work with differing political views.