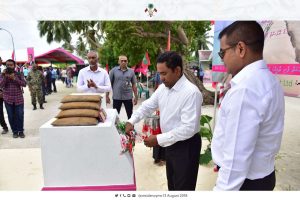 During the ceremony held this evening, at the harbor area of Kandoodhoo Island, President Yameen unveiled the monument placed to mark the completion of beach protection project.

Prior to Kandoodhoo visit, President Yameen visited Thimarafushi Island this morning and inaugurated the island’s water supply services and took a part in the ceremony held to make the completion of the beach protection project in Veymandoo Island of Kolhumadulu Atoll.

RESOURCE UTILISATION IS THE KEY TO ACHIEVE THE COUNTRY’S ECONOMIC DEVELOPMENT...THIS ADMINISTRATION HAS CARRIED OUT LAND RECLAMATION PROJECTS THAT EQUAL TO...
Scroll to top