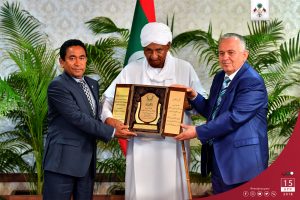 President Abdulla Yameen Abdul Gayoom has stated that we have a duty to help our Muslim brothers and sisters who are displaced around the world. He made this statement while speaking at the ceremony held this afternoon, to confer the Award of Recognition to President Abdulla Yameen Abdul Gayoom, from the International Moderation Forum. The ceremony was held at the President’s Office.

The International Moderation Forum promotes the true message of Islam based on humanity, and advocates combating against the global issue of terrorism, through a moderate Islamic vision.

At today’s function, the President expressed profound thanks to the organizing body of the International Moderation Forum of Jordan for conferring the Award. He also said that the Award added incentive to bolster his current effort in counter-terrorism, and in the enhancement of moderation in preaching and practice of Islam in the Maldives.

In his speech, President Yameen highlighted that we have reason to unite together to relinquish the common threat faced by the Muslim Ummah today, to counter debilitating forces from within and outside that tarnish the good name and true teaching of Islam; and those framing Islam as a cult-like deity that espouses violent revolt.

Speaking at the ceremony, President Yameen noted that the Maldives has made enormous strides in implementing substantial measures to foil radical thought, terrorism and violent extremism. He highlighted the establishment of the National Counter Terrorism Centre (NCTC) in 2016, and the enactment of the Prevention of Terrorism Act in 2016, as notable milestones.

During the ceremony, President Yameen noted that it was the world leaders’ ethical responsibility to enhance the power of moderation and tolerance in the Islamic world, and achieve effective communication among all countries of the world.

Previous recipients of the Award of Recognition by the International Moderation Forum includes the late king of the kingdom of Saudi Arabia, H.M. Abdullah bin Abdulaziz and current President of Mauritania, H.E. Mohamed Wildhu Abdulaziz.